A song “from an album with a beautiful cover”. But seriously, who can possibly keep track of this? How do you even know what the albums look like, do you keep watching Spotify while listening to music? This prompt stopped being relevant at the same point CDs did.

If you follow this blog you know that I have a thing for Annika Norlin. Now this entry won’t be one of her songs, but another woman singing with northern Swedish dialect – Friday Hyvönen. This is her latest album cover:

When my partner left his previous job, one of the gifts he got was tickets to see Cirque du Soleil (Varekai) in Amsterdam. Yesterday was the day, and we braved public transport without trains (they’re doing maintenance and there won’t be any trains past where we live until Wednesday…).

Neither of us had any idea of what to expect, I only knew I’d heard it called “nycirkus” (“New circus”). If asked to describe it afterwards, I’d say it’s a mix of dancing, acrobatics and circus, which was surprisingly nice. At times there were so much going on on stage that I had no idea who to watch, but that’s alright.

The woman sitting next to us was complaining the whole first act and left in the break, so that’ll show you that opinions differ. We were seated pretty far from the stage, and I think if you’re to go it’s worth splurging on tickets closer to the stage (and risk being approached by the clowns), so that you can see a bit more of facial expressions and all that. It was certainly an experience I enjoyed. I don’t think you should “prepare” too much before seeing them, so here is the small promotional video I found that does indeed not say too much…

I’m too tired to write a Feminist Friday post, so I’ll do this instead.

This week
The good:
Pivot tables from God
This guy, watching Pitch Perfect in the train!!

This picture I made of a bumblebee in our cherry tree:

Starting the computer and seeing this first of all: 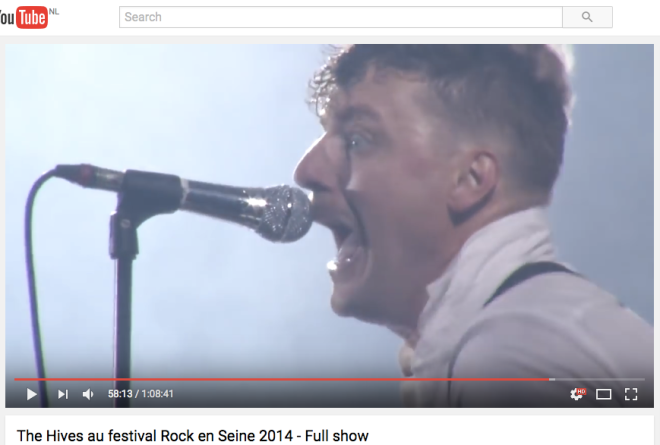 The bad:
Our new temp

I like to think that I’m usually quite reasonable (then again, who doesn’t think that of themselves?). But sometimes I get, what even I think is unreasonably, annoyed by certain things. My latest pet peeve is this:

To quote that video that went around like 20 years ago; “WTF mate?”. *
Look. If you’re trying to sell me things, it should be enough of an indication of my interest that I’m still scrolling down, right? At NO POINT, should I have to repeatedly click a fucking button to “see more”. No. I refuse. Screw your new website Ecco.

Especially annoying is the one on the left from bol.com, where I’m trying to view my own “wish list”. And since I’m completely reasonable, my wish list only contains 194 books that I may or may not ever read, but in any case just show me the damn list.

An American (a biiit higher up in the chain) is here this week to train us in using a new reporting program. As we were going through the introduction this exchange happened:

me: So this is basically like a really clever pivot table?
American: This is like the pivot table FROM GOD!! (wild body language) 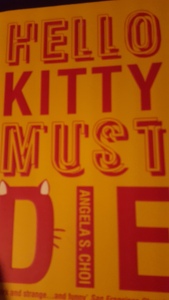 At one point I was taking advanced courses at Uni, thinking I’d go for an MA (obviously I didn’t, I have 0 follow-through). One of the optional books in the literature course was Hello Kitty Must Die. I didn’t read it (think I opted for Wetlands instead?), but did buy it. And now, years later, I figured I should finally read it.

Fiona Yu is a 28-year old lawyer who still lives at home, since her (Chinese) parents think the only acceptable reason to move out is to marry (a Chinese man). To achieve this, her dad sets her up on dates, with the advice to “wear lipstick”.

I would guess this is a book you love or hate. The language is pretty explicit at some points (I mean, it’s nowhere near Wetlands, but still), and this is how it starts off:

One thing leads to the next and Fi is off to see a hymen-restoration surgeon, who turns out to be her childhood friend Sean. So far so good, and it might almost be a raunchy chick lit. But it’s not. I won’t reveal too much, but will instead show some favorite sections from the book. If these appeal to you, you should just read it. It’s only 250 pages with 1,5 space lining, so it can be finished in a day if you commit.

“No thank you.
‘Fiona doesn’t mean that,’ said my father. He laughed nervously and said, ‘Don’t listen to her. She says no when she means yes.’
The classic defense of rapists.” (160)

A song “from a genre you usually dislike”.

My music teacher in high school used to say that all music is good to those who like it, and I genuinely think that one might find music to like in all genres. However. Jazz – I just don’t get it. And still, this one song is impossible not to like:

This is some sort of review, so if you’re worried about spoilers I’d advise you to stop reading here and go do something else.

This book was pretty hyped in the media I consume. So much so that I was hesitant to read it, fully expecting to be disappointed. However, I eventually gave in and bought it, and now… I’ve read it.

Evie is the narrator, and the book jumps between present time (not specified exactly when that is) and the 60:es, when she  was a teenager who happened to kind of join a Manson-like cult.

The jumping back and forth is done well and is actually not confusing, and the language is delightful. While Cline covers the leader-figure and explains his appeal, the main point of the story are – as the title shows – the girls and their relationships.

“If you got mad, you were crazy, and if you didn’t react, you were a bitch. The only thing you could do was smile from the corner they’d backed you into.” – on being a (teenage) woman.

There is no secret in the book, the “big event” is revealed straight from the start, and yet it’s so well written that it’s interesting until the end. Not due to cliffhangers or curiosity about who does what, just… to see what Evie actually went through as a teenage daughter of two divorced parents. . 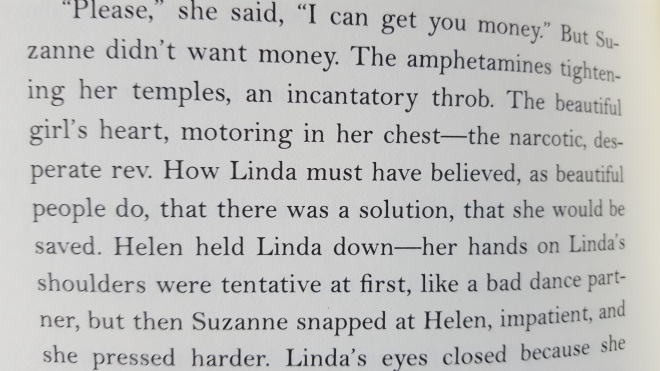 And one of my favorites: “How Linda must have believed, as beautiful people do, that there was a solution, that she would be saved.” (Also reminds me of that storyline in 30 rock where John Hamm is Tina Fey’s incredibly stupid – but pretty – boyfriend.)

If you want to read a proper review, I suggest the one from The New Yorker – here.

I listened to this podcast, and it made me angry. I mean, not the podcast itself, but now I’ve been thinking about what they said for over a week and they’re right and it pisses me off.

For non-Scandinavian speakers, it’s about the question most (all?) feminists get at some point – “do you hate men?”. The two women say that yes, they do, and proceed by explaining why. And they’re right. And I’m angry. It comes down how men are taught all their lives that they have the right to be center of attention, to be heard. How women are raised to pay attention and take others into consideration.

First I was all “yeah yeah, I’ve heard it before”. I’ve always thought of it as a more serious problem, like something I didn’t take part in and that people in my surroundings are mostly respectful to me.

But this time it stuck with me. How my male colleagues systematically “don’t hear” (don’t listen) when women are talking. How they don’t remember things we say, but remarkably do remember things other men say. How it annoys me when people are loud or noisy, because “they should think of others!”, while my partner “didn’t even think about it”, because to him it’s natural to take up space and be noisy, no matter who’s around.

I feel stupid that it took me until now to see this as a system. And it makes me think of this song where they sing:

A song “by a band with more than 5 people in it”. Some years ago I listened quite a bit to DKM and Flogging Molly, and this is a song where I’ve always liked the verses but not the chorus – “Punch Drunk Grinning Soul”: