So. We have “most likely” (according to the doctor) both had Corona now. I’m starting to get back to normal, it’s just the energy levels that are lagging a bit behind at the moment. And I have revised my original “it’s just a flu” thoughts – this was much worse than the flu, and much worse than the swine flu (which we also had), and we were both completely healthy going into it.

I also want to be clear in that, despite thinking it was just a flu, I completely follow the rules and instructions set by the government. This is a very obedient Swede typing. In addition to this, my mom spent 10 years as part of the risk group (before passing away last November). I would never do anything to increase the danger for anyone in the risk groups.

On the upside – we’re (probably) done with that now! Yay. One less worry going forward.

Lost all sense of smell and taste due to the above, so these have been the most boring 2 weeks in food I can remember. It’s starting to come back a little now, but it’s going slowly.

Have been trying to keep up with Morgonpasset. It’s not going super well since they broadcast 5 days a week, but I like most of them.

Trying to keep up with Japanese classes after having been sick and missed 1 class (lucky! they cancelled the previous week, when I was also not doing well). Downloading all the apps:

Did I order dumbbells to make sure I can work out at home when I feel well again? Yep, you bet. I had the kettlebells already.

New songs from 2 of my favorite Icelanders! Axel’s is a single, but Ásgeir’s is a new album.

I got company! Louise is currently visiting, so I’m showing her Leiden.

Kid’s toys! Somehow I’ve managed to plan that next weekend we’ll go to Germany to visit friends there, and their youngest turns 1 on Thursday before we get there. The weekend after we’re visiting friends in Utrecht who have a 4 month old kid. Busy busy, and all the kids. I’ll be exhausted.

Do I remember week 4? Not really, no. Week 5 however, was partially spent in Lisbon, so we tried ALL THE FOOD (and many of the wines). 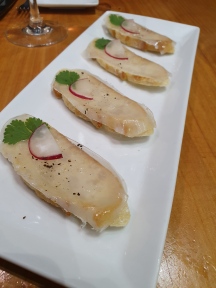 I’ve now been sick 3 times in 2020. This seems unreasonable to me, and is obviously impacting my workout (which is, so far, basically non-existing). Boo 😦

Can we also talk about the fact that work flew me in to Lisbon for one (1!) workshop? I find it completely ludicrous, but everyone tells me I should just enjoy it. So I did. Dutchie flew in with me, and we spent 3 days there before said workshop. Still one of my favorite cities!

I can’t even remember last week (4 that is, this was written in the past)? What did I do? Did I work out? At least week 5 was active, albeit not in the gym. 4 days of being a tourist in Lisbon means involuntary cardio (fucking hills). Totally worth it.

Cows break out for night of fun in the snow

Also started/finished season 1 of the Umbrella Academy, and it’s not bad!

I went to the gym again! Didn’t really want to, and chose the worst day and time to start going back – first Monday after New Years, at 5 pm. Go me. Despite Lisa‘s recent promoting of a (seemingly very tough) routine, I went with the one she’d recommended when we met at Christmas – A Muscle Building Workout Routine. It’s the first time I’ve tried a 4-day split, and let’s say it was maybe a stupid choice for first week back? lol. Thursday, when I was supposed to do “upper body B”, I could barely walk and decided not to. So first week this was a 2-day work out. We’ll see how week 2 (irl week 3) goes!

As I’m trying Lucy’s Strongaholics, I’ve been tracking my food. Apart from the mind-boggling “there is no bad food”, turns out I’m not eating enough protein. Also, how will I manage when I’m spending a week in Iceland? Time will tell.

Tuesday (I guess today? I’m scheduling this for Tuesday to not have multiple posts in one day) I’m going to Iceland with Louise! It’s time for our yearly catch-up called Iceland Airwaves. Can’t wait.

As I’m old and don’t listen to the radio, I was COMPLETELY unaware of Billie Eilish until someone I followed on instagram asked something about her fashion choices (the answer was “we’re too old to understand that”), but now I’ve been listening to her, and I like it!

Trying a new workout tracker called Strong. No, I guess this will never stop as long as I continue to go to the gym. It’s pretty! We’ll see how long I like it – to be continued.

Here’s my latest luxury problem: I am now a member of no less than 2 gyms. Yes. I know. It’s ridiculous, and wasn’t I happy with my new gym?
Yes, yes I am. AND YET. Fall/winter here in the nether lands (not sic, I did that on purpose) means rain, rain and a bit more rain. And none of that silly rain that falls straight down, against which you can use an umbrella. It’s also always windy. Even with my fancy new yellow rain poncho for biking, you get soaked (on the legs). And approximately 3 minutes walking from my house there’s a gym. One of those cheap chain-gyms that I usually avoid. Now I joined that one too. Total monthly gym expense is now 59 Euro (which is still cheaper than when I went to a fancy gym), and I figure it will increase the chances that I go during the rainy part of the year. Visited for the first time on Monday, and found my favorite corner with pretty Technogym Pure Strength machines:

I watched Katherine Ryan’s “Glitter Room” special on Netflix and laughed out loud several times. That’s no small feat, I usually only laugh on the inside. Watch it!

Also watched Amy Schumer’s Netflix special and it was.. ok. I enjoyed the above one far more. (Look, I find Amy the funniest when she gets critical, rather than the Moran-style “don’t be scared of me” feminist approach, and she did that for a total of like 2-3 minutes. The rest was quite “meh”.)

Yeah! I went to the gym! More than once! Also had to wait to use equipment (for the first time in the new gym). Apparently Wednesdays are chest days? I’m now dislike squats (only cause it’s getting heavy for me? Maybe), but quite like benching. I’m sure that’ll change soon enough though.