This week I spent 3 days in training, redoing my IATA dangerous goods regulations for work. The exam has to be passed every other year, and I nailed it again (95%, thanks for asking). It meant very long days out of town, and that I didn’t go to the gym.

Saturday we had friends over as they had agreed to try fermented herring with Dutchie. I had provided ALL sorts of disclaimers before, to make sure they knew what they got themselves into. After the first bite, the other woman in the company said “j’adore!” (not sarcastically), so that was somewhat surprising.

Fall is upon us, and I ordered a yellow rain poncho to eliminate one of the excuses I made for not going to the gym this week.

Nein! I was knackered and made up all kinds of excuses not to go. New week, new opportunities.

Phew, last week was pretty awful, and I need vacation, so I’ll leave it at this: 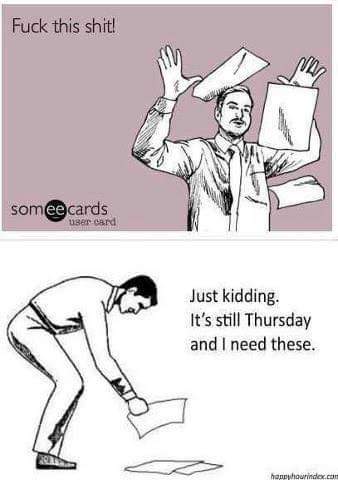 This week was pretty terrible, but I did manage to get to the gym one time – Friday morning, and it was pretty fabulous. I was there for an hour, and it was me and 1-3 others.

Where I work, they may be a lot of Dutch people (you know, since we’re in the Netherlands), but the company is American. This is noticeable in some things like our system (Oracle, not the European SAP) and the voice that greets you when calling the general phone. I swear it’s the most American sounding man possible. Anyway. We also use Apple. While I realize that’s not in itself more American than Windows, in our line of business, it seems as though not a lot of European companies use it. Because NOTHING WORKS. FedEx interface? – Go to this virtual Windows machine. TNT interface? – Go to this other Windows machine. Create export documents? – Use that first Windows interface again, but with a different browser.

As of last year, they’ve opened a window (no pun intended) for us to choose computer when we get a new one – Apple or Dell. It breaks my heart a little, because the UI of Apple has completely won me over, and I use it at home now too, but I did this:

The last time I used a Windows machine was 2013, soooo, let’s say it’s not super smooth yet? There are also some Apple functionalities that I miss, and the stupid VPN is being a pain. But apart from that – stuff works. The computer is friggin’ ugly, but it works.

In the 10 years since I moved to the Netherlands, I’ve been commuting to work – a minimum of 1 hour each direction the whole time. I don’t even want to count how many wasted hours that is in total, but there you go.

Now that we’re moving (and everything is set! Mortgage, house sold, all that stuff), my brain seems to be just done with this travel time. Even after a very relaxing 2 week vacation, I’m SO unmotivated in the mornings. And it’s not cause of my work, cause that’s still perfectly acceptable. Brain goes “nope”. I imagine it sounds kind of like when Lana in Archer says “nope”:

You know when you live in a country where they have snow so rarely they can’t deal with it? And then this happens.

/left work at noon yesterday (with the laptop, cause apparently shit still has to get done)

…but today was such a day. Today I found out that one of the favorite people I’ve ever met through work suddenly passed away (car accident), and I just can’t deal. 😦

The post I was working on will come another day.

I struggle with a colleague. In my team of 5, there are 4 introverts and 1 extrovert. This extrovert is seriously killing me. This person doesn’t listen to all the words I say, just some, and then they make an interpretation of what was said. I’m not sure if this is due to the outgoing nature of the person, but to me they’re linked.

(me): Well I see that it’s wrong, but I’m not sure if they have to change something in the background too, so it’s better if you ask them to fix it so that everything goes right.

(colleague, 10 minutes later): He said he fixed it, but it went really fast and you said it was more complex with more things that had to be done.

Just… no. Listen to the words I say. Don’t interpret. The words are LITERALLY what I mean. There is no between the lines.

My partner calls me “very literal” and “part vulcan” (we’re re-watching Star Trek, it came up). I choose to see these as a compliments.