A Day in Life. Not doing anything special? Well! Then you’re just going to have to make some plans, aren’t you?

I had a day off on Monday on behalf of not having taken enough vacation this year, and only being allowed to transfer 5 days to next year. We went to see QOTSA in Amsterdam’s Ziggo dome on Sunday, and I thought it’d be nice to get to sleep more than 5 hours that night.

So instead I used my brand new Museum card* for the first time – and what better way to start that off than to go to Rijksmuseum (a.k.a. where all the tourists go to see the Nightwatch)?

I’ll throw in some Wikipedia knowledge for you as well:

The Rijksmuseum was founded in The Hague in 1800 and moved to Amsterdam in 1808, where it was first located in the Royal Palace and later in the Trippenhuis. The current main building was designed by Pierre Cuypers and first opened its doors in 1885. On 13 April 2013, after a ten-year renovation which cost € 375 million, the main building was reopened by Queen Beatrix. In 2013 and 2014, it was the most visited museum in the Netherlands with record numbers of 2.2 million and 2.47 million visitors. It is also the largest art museum in the country. 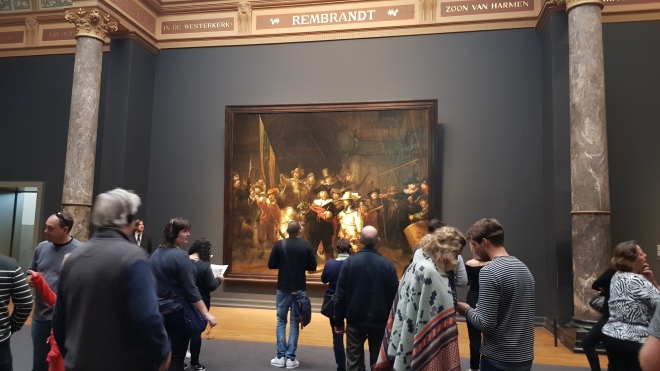 All in all a very well spent day off.

*for €60 a year, you get free entry to something like 400 museums in the Netherlands. Rijksmuseum alone has an entry fee of € 17.50 normally.